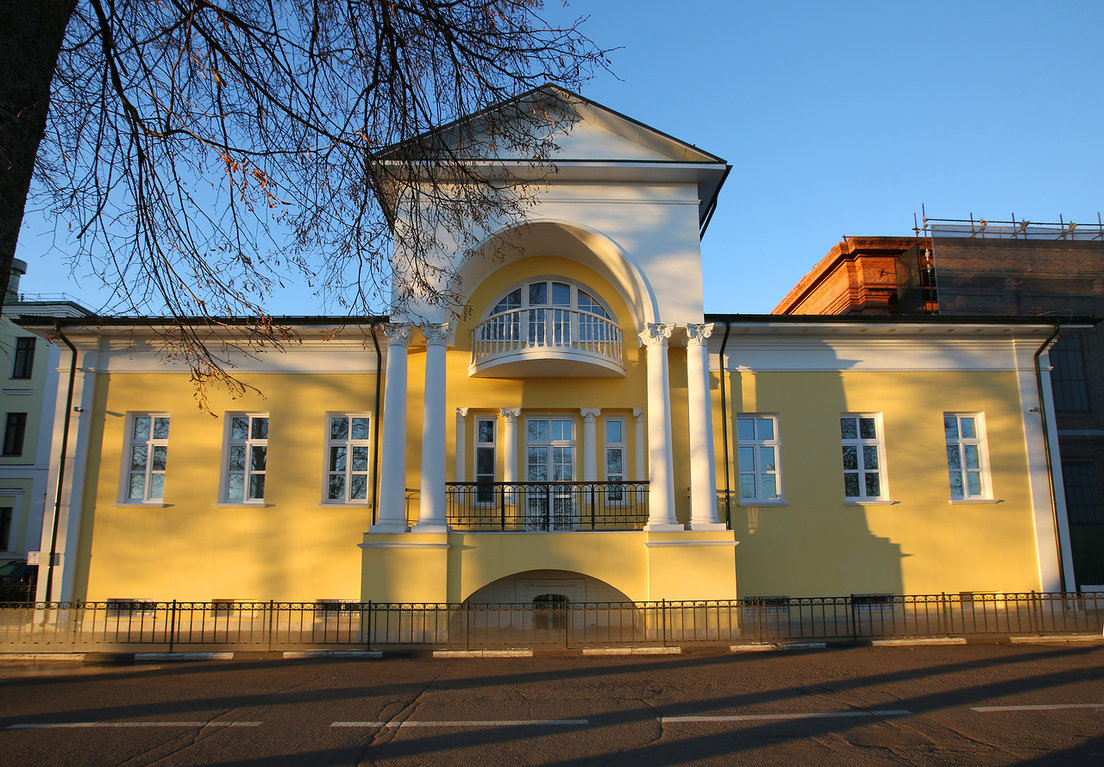 The ancient house number 15 on the Volga embankment was built in the last third of XVII centuries. From the original building only magnificent cellar (lower part of the building) was remained. The outward appearance of the building has changed in the style of late classicism in the XIX century.

Builder and the first homeowner was a son of rich Yaroslavl tanner Dmitry S. Rukavichnikov.

In 1799 the house was placed under the city magistrate and further under the official apartment of the Yaroslavl police chief.

In 1862 merchant A.I. Trunov rented this house and in 1869 he gave it to the Yaroslavl Society of Physician, where clinic with maternity department was created. That was the second clinic in Russia (after St. Petersburg), where people could obtain free care.

After the Revolution, until 2001, the house was administered by the regional Health Department. There were the school of midwifery and further the unit of Yaroslavl Maternity Hospital No. 1.

In 2014 the dilapidated house was acquired by ОАО Yaroslavl Technical Carbon.

Thanks to research and renovation works the museum of art porcelain, silver and cast-iron ornamental casting was opened here.

загрузка карты...
Return to the list
Leave a request for a tour
It is completely free. Our experts will take into account all your wishes: dates and time of stay, the composition of the group. We will prepare an interesting itinerary for you, suggest the best places to stay, and arrange a meeting with the guide.
Submit
your application
Verified routes and guides
Seeing the sights of Yaroslavl with your own eyes is good. However, it is even more interesting to learn the history of the object.
General Sightseeing Tour in Yaroslavl
Includes visiting central squares of the city and the Monastery of Transfigurati...
Free-of-charge audio guides IZI.TRAVEL
Audio guides IZI.TRAVEL is a convenient way to explore history and places of i...
The whole list
Hotels and restaurants
Vanilla Sky
$$$
Restaurant Vanilla Sky is located in the very center of the ancient Yaroslavl, ...
Cosmos Yaroslavl Hotel
★★★★
recommend
Volga
$$
Restaurant complex Volga is located on the bank of the Volga river in the hist...
Hotel Complex St. George
★★★★
St. George Hotel is one of the best and inexpensive hotels of Yaroslavl. It wa...
Mamuka
$$$
A big family restaurant of Georgian cuisine with its own bakery and cheese dai...
Ring Premier Hotel
★★★★
Ring Premier Hotel offers comfortable and cozy atmosphere for the guests of th...
Volga Pearl
$$$
Restaurant Volga Pearl is located in one of the most green and picturesque pla...
Royal Hotel Spa&Wellness
★★★★
SK Royal Hotel Yaroslavl is a hotel in the historical center of Yaroslavl, on ...
Plaza Loft Cafe
Ibis Hotel
★★★
Hotel Ibis Yaroslavl Center is a comfortable business-class hotel which implem...
Ioann Vasilievich
$$$
The menu of the restaurant offers dishes of classical pre-revolutionary Russia...
Hotel Complex Lyubim
★★★
Hotel Complex Lyubim is located on the bank of the river Kotorosl, 5 minutes w...
Design Hotel Dostoevsky
★★★
Dostoevsky Hotel is located in the center of Yaroslavl, where all cultural and...
Sobranye
$$$
A restaurant-museum of Russian cuisine. Why is it called the restaurant-museum? ...
Mansion Hotel 18th Century
★★
Warm and friendly atmosphere and coziness of the hotel, which is located in th...
Bazar
$$
Diner BAZAR harmonically unites attractive interior and functionality, traditi...
Hotel Complex Korovnitskaya Sloboda
★★
Korovnitskaya Sloboda is the hotel located in the ancient city district Korovn...
Penates
$$$$
Penates Restaurant is located in the central part of Yaroslavl, in a walking d...
BM Hostel
★★
European hostel in the center of Yaroslavl. Prices begin from 450 rubles per n...
Boulevard
$$$$
Boulevard is a café located in the historical center of Yaroslavl, in the buil...
The whole list
Upcoming events
All events